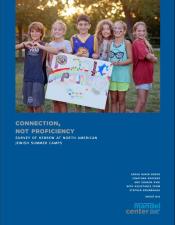 A new report from the Jack, Joseph and Morton Mandel Center for Studies in Jewish Education at Brandeis University, funded in part by CASJE (Consortium for Applied Studies in Jewish Education), offers an unprecedented look at the many ways, to what degree, and the reasons why Hebrew is incorporated at Jewish overnight camps across North America. Connection, not Proficiency: Survey of Hebrew at North American Jewish Summer Camps surveys the experiences and opinions of camp directors at 103 camps. As the report shows, the overwhelming majority of these camps are deeply invested in using Hebrew to connect their campers to their camps’ traditions, to Israel and to Jewish peoplehood.

The survey report is part of a larger study of Hebrew at North American Jewish Summer Camps being conducted by Sarah Bunin Benor, Jonathan Krasner, and Sharon Avni, the results of which will be published as a book (Rutgers University Press, forthcoming in 2017). Beginning with pilot research in 2012 and culminating in 2015, the study involved observation at 36 camps around North America, interviews and focus groups with about 200 staff members and campers, archival research, and document review, in addition to the survey whose findings are presented in this report. The study is a project of the Jack, Joseph and Morton Mandel Center for Studies in Jewish Education at Brandeis University, with funding from CASJE and additional support from Hebrew Union College-Jewish Institute of Religion and City University of New York. Initial seed funding was provided by a Wexner Foundation Alumni Collaboration grant.