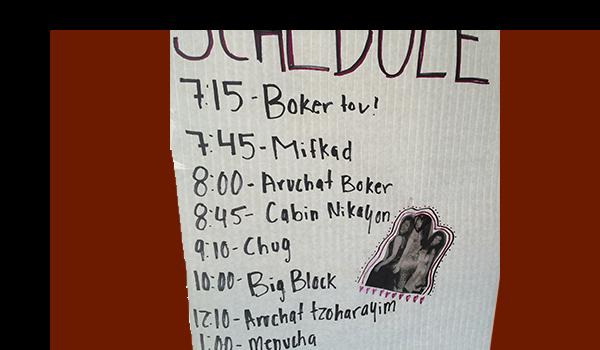 The following article has been re-posted from the Wexner Foundation Blog.

Have you ever “meltzed” (waited/bussed) a table? Gotten a band-aid at the “marp” (infirmary)? Or selected an elective for “Shabboptions” (Shabbat options) or “t’floptions” (tefilliah options)? Then you most likely attended or worked at a North American Jewish overnight summer camp. These words stem from Hebrew (and English) but have developed uniquely in the rustic settings of Jewish camp.

Over the past two summers, along with our colleague Sharon Avni, we have been studying how Jewish camps use Hebrew (defined broadly). Our goals are to understand how Hebrew at camp reflects and contributes to broader trends in Jewish life, as well as to offer recommendations for incorporating Hebrew into camps and other Jewish educational institutions. We began our travels with a Wexner Alumni Collaboration Grant. Our work then became a project of Brandeis University’s Mandel Center for Studies in Jewish Education and we subsequently received funding from the Consortium for Applied Studies in Jewish Education. This funding allowed us to visit about three dozen camps, sift through documents and artifacts in four archives, and interview over 110 camp professionals and 60 campers. Now begins the hard part: analyzing thousands of pages of notes, transcripts, program materials, historical documents and photos and synthesizing our research into a book. In the meantime we can share a few preliminary findings.

We found a wide range of Hebrew use at camps. At some pluralistic or private camps, like Surprise Lake, Modin and Kinder Ring, Hebrew is limited to discrete times (mostly Shabbat) and activities (prayers, song and dance, mealtime blessings and bar mitzvah tutoring). At a few camps, includingMassad Winnipeg, the Israeli-American Machaneh Kachol-Lavan and OSRUI’s Chalutzim Hebrew immersion program, Hebrew is the primary language spoken. Most camps we visited are between these two poles, using Hebrew songs, signs and words for activities and locations around camp, like “kima” (wakeup), “chugim” (electives), “nikayon” (cleanup) and “teatron” (theater). Such words can be found in small numbers at some JCCA and independent camps and in large numbers at camps affiliated with the Union for Reform Judaism, Young Judaea, Habonim Dror, Hashomer Hatzair, B’nei Akiva and Ramah. In addition, Ramah camps tend to use Hebrew for theatrical productions and announcements. The Haredi camps we visited feature artistic representations of religious Hebrew quotes, and they use dozens of Hebrew words in their (Jewish) English, but generally not to refer to camp locations and activities.

Beyond the incorporation of Hebrew words into signs around camp and names of activities, we also observed a number of explicit Hebrew pedagogical practices. Most camps have stopped offering Hebrew classes, but many enlist the mishlachat (Israeli staff delegation) to teach Hebrew words informally through songs like “Shigaon” or through “Hebrew word of the day,” incorporating theatrics and wordplay (the pun people recall most: “There’s a fork in ma’s leg: fork-mazleg”).

Along with this diversity, we found multiple opinions about Hebrew among camp staff. Some love the incorporation of Hebrew words into English sentences and blends like “t’floptions,” and others feel they are incorrect or harmful to language acquisition. Some believe their camp should strive to use only Hebrew, but most feel that is impractical. These debates are not new. In fact, we trace them back to the establishment of the first Jewish education and culture camps in the aftermath of World War I.

Although campers might only learn a few Hebrew words each summer, these practices send a clear message: Hebrew is important, and it is our special language. Is the use of Hebrew viewed as a form of Zionist affirmation? A vehicle for Jewish cultural revival? A key to unlocking Jewish classical and liturgical texts? These are some of the questions we are asking as we continue our analysis. The answers will help us shape our recommendations for how different camps might approach Hebrew.

In the meantime, whether you work at camp, send your children or grandchildren to camp, read about camp on eJewishPhilanthropy or watch “Wet Hot American Summer,” keep your ear out for camp Hebrew. If you hear something interesting or want to share your opinion, please get in touch. Todah rabbah.